Now that I had pie chart cookies, I needed to make a representation of the fecal sample.  I briefly considered making a realistic poo log, but quickly decided against it.  After all, I wanted people to actually eat the cake.  I spent enough time thinking about making a bloody poo cake to fully plan it out (chocolate-frosted red velvet cake with a cherry-based filling, so that when cut open red chunks would ooze out) but ultimately decided against that as well.  The Human Microbiome Project only reported on healthy humans.  Finally, I decided on a stylized poo made from chocolate fudge cake and a chocolate and Nutella frosting.

That being said, I don’t often have time to do these things.  Sometimes you just need to make a cake fast.  Enter the box cake.  Some bakers turn up their noses at a box cake. “Ugh,” they proclaim. “It doesn’t take longer to mix one yourself – and it tastes soooo much better!  Don’t be lazy!”.  To these people, I say: Go and stuff it up your bottom.  It absolutely takes longer and the box cake doesn’t taste bad at all.  Modified box cake is easy, tasty, and fast.  I made a version of this in jars (microwaved, no less) as favors for my wedding last year.

An oven was preheated to 175˚ C (350˚ F).  One ramekin, one 8″ cake pan, and one 9″ cake pan were  coated with vegetable shortening to allow removal of cake after baking.  Cake was mixed as previously described, except 1 c buttermilk was substituted for sour cream (sour cream was not used due to mold contamination) and glaze was omitted.  Cake was poured into greased cake pans and baked until a toothpick inserted in the center of the cake was no longer coated in batter or crumbs when removed.  Cakes were cooled to room temperature and refrigerated for easier manipulation.

Two containers of chocolate fudge frosting were combined using the whisk attachment on a stand mixer with what remained of 1 c Nutella after copious investigator snacking. 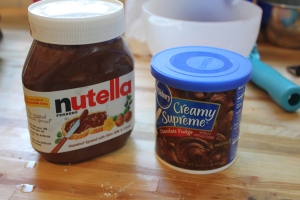 The 9″ cake was removed from the pan and placed onto a cake stand.  The top was leveled using a large cake knife spatula held horizontally while the cake stand was rotated. Approximately one cm was trimmed from the edges with a small kitchen knife.  A one cm layer of frosting was applied to the top with a silicone spatula. 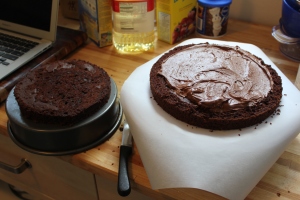 More frosting was applied and sculpted with a small cake knife to resemble a poo. 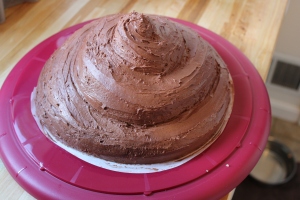 I should have used more Nutella but I ran out of Nutella.  I love Nutella.  I also meant to sculpt the inclines of the poop swirls out of cake but I ran out of caring.  I shaped it out of frosting instead, which resulted in weird globs of frosting on the cake.  It worked out well for people with a deep, serious, loving relationship with frosting, but grossed me out a little.

Finally, the cake looks like a poo.  My advisor requested no more cakes that look like a poo, but he still ate two pieces so I consider it a success.